Born in Bolton in 1956, Terry was attracted to painting and the surrounding countryside at an early age. He is completely self-taught and his empathy with his favourite subject, the English landscape, has developed his vision and technique with each painting. The rolling hills of England come alive. Terry's style reflects his meticulous attention to detail, his depth of view and the superb representation of the colours of nature. One of the pleasures of owning a Terence Grundy painting is that is becomes an integral part of your home, giving a feeling of standing at a window to the countryside. This impact has given him a considerable following, his work being sought by galleries and individuals at home and overseas. 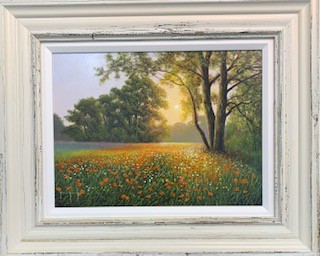